Sanjen Jalavidhyut Company Limited (SJCL) is a subsidiary of Chilime and was incorporated in March 2010 as a public limited company. SJCL has planned to develop two new projects–Sanjen Hydroelectric Project (SHEP) having capacity of 42.5 MW and Sanjen(Upper) Hydroelectric Project (SUHEP) of capacity 14.8 MW in Rasuwa district of Central Development Region.

The company will manage the debt requirement of the project from the EPF for which tri-partite loan arrangement has been signed between EPF, Chilime and SJCL. The equity investment will be made through 51% promoter share and 49% public share. Chilime has 38% shareholding in SJCL. The promoter share will be raised first then after public share.

Over 203 Ropanis of private land for the access road and project structures has been acquired and compensation for land is being distributed to the land owners through Rasuwa District Administration Office. The foundation laying ceremony of the 10.65 km long access road for the projects was held on January 21, 2011 and about 1.5 km length of the track road has been constructed up to the end of Chilime village. Evaluation of Bids for the construction of Access Road has been completed and construction works are planned to start by March end 2011 with target completion period of 18 months. Other infrastructure works like the construction of camp facilities for the project and local development works in the project area will be carried out simultaneously. The commercial operation date for SHEP is scheduled to be September 2015. 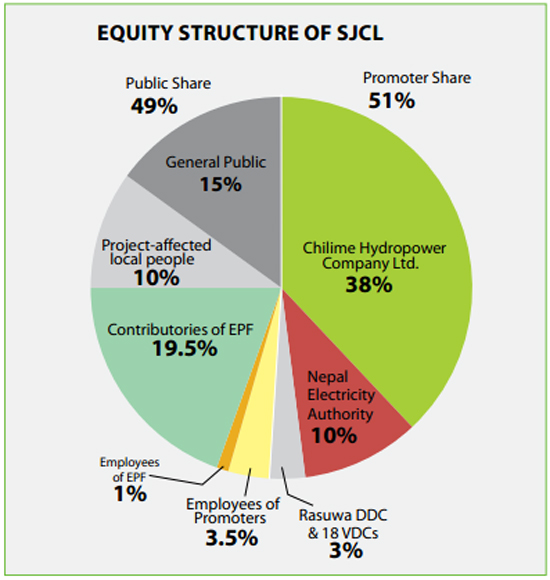 Status of the project
- PPA has been signed with NEA for SUHEP on 10 October, 2011 and for SHEP on 5 December, 2011 with the commercial operation date (COD) of July 2015 and December 2015 respectively.
- Generation license for SHEP has been received from the Ministry of Energy for a period of 35 years from 28 November, 2012 and that for SUHEP it is in the process.
- The EIA reports of both the projects have been approved by the Ministry of Environment.
- Detailed project reports of both the projects have been completed.
- Debt portion of the project will be fully financed by EPF for which the tri-partite loan agreement has been signed on 8 December, 2011 between SJCL, Chilime and EPF.
- SJCL has planned to commence the main construction of both the projects simultaneously from December 2012 with the target of completing them within the COD.
- Bid Evaluation of Civil and consultant is in process.
- Bid for Hydromechanical work is in progress.

- Land acquisition and compensation distribution for the access road and project structures has been completed. Construction works of 10.65 km long main access road for the two projects, access road for surge tank and camp facilities at Thambuchet, Chilime VDC are in progress.